Aetheric Ephemera: The Edifice of the Self Edition

No blogging this past week because I have been writing my ass off elsewhere:

1) My new Apex blog post, which did not get much attention, although my editor loved it. I like the idea of the Paradox Continuum as a metaphor for how fantastika is looked at as a genre with both adoration and scorn. I hope to write more about it in the future.

2) I get my lit dork on in my latest SF Signal column. Hal Duncan responded with some good observations and pointed me to his work on the subject, which is intriguing and productive (I also liked this piece by him quite a lot). I'm going to explore the novum idea more in next week's column and see if I can either wring some utility out of it for fantasy or figure out more of its problems.

3) I also posted a long review of Jeff VanderMeer's Monstrous Creatures. I highly recommend the book for its combination of insight and evocative observations.

4) I have a few things in process. I just submitted a guest blog to Bryan Thomas Schmidt which should be up on Monday. I am finishing a review that should be up at Functional Nerds in the next several days, and reading two more books for review. And I added another thousand words to what is becoming a novella. Little fox child has a bigger story to tell than I thought!

5) In other news, Diana Wynne Jones has died. If anyone demonstrates the effect of children's fantastika on creative folk, it is her. Many writers fondly remember escaping into her books. I never thought of her as an influence, but as more people talk about her work her effect on the collective imagination is obvious. It underscores for me the importance of good children's literature for our own children.
Posted by The Erudite Ogre at 3:03 PM No comments:

So at last year's Readercon I brought my camera because when I attended in 2009 I took pictures with my phone and they were awful. So awful. The large meeting rooms are not well-lit and distances confounded my camera. So last July I brought my unipurpose camera. It can take good pictures, but it is several years old and thus is one-step removed from the albumen process in digital terms. Also, the screen is dead, so I can neither see what the camera sees nor know what the settings are, except for scrolling through choices until the edge of an identifiable symbol appears and I then count the number of clicks to get what I think is the proper configuration for the photo I want to take.
With this in mind I took many pictures at Readercon 21, about 225 of them, about 2/3rds of which were at the Kirk Poland Memorial Bad Prose Competition and involved me shifting about the room hoping to get enough light in the shot for it to not be a chaotic fuzz or nine shades of darkness. I went through them a few months ago and tossed over 85% of them, because, indeed, my camera betrayed me and most of them were unusable. Those that survived aren't fantastic, but they go give you a bit of the flavor of the con, so I offer them to you for a chuckle or, perhaps, a moment of wistful recollection.
---Peter Straub at a panel. He was the jolliest panelist of the convention, but sadly always dwelled in darkness: 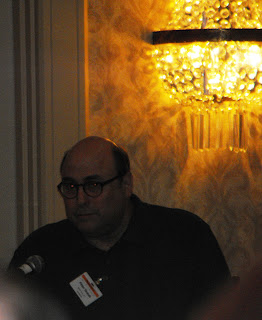 ---Samuel R. Delany at his reading. Note the casual attire! 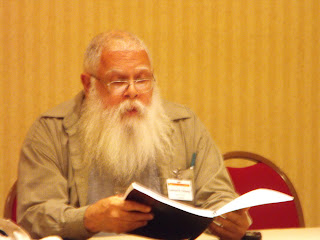 ---Mr. Delany again, minus his spectacles: 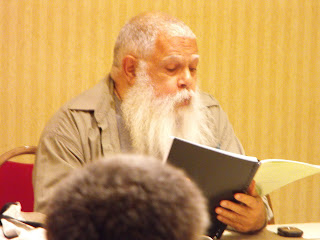 ---Barry Longyear at the panel on anarchism and SF. Um, he REALLY does not like anarchism. All of my other photos are of him looking annoyed or leaning his cheek on his hand in exasperation: 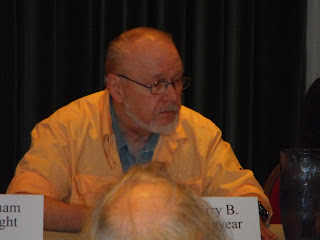 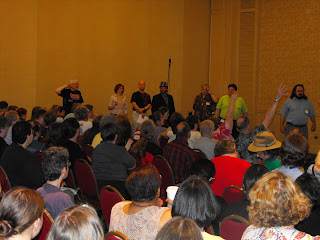 ---Down to three. I selected this one because Mike Allen looked right at me with that "haven't you taken like 40 pictures of us standing here already?" smile. And I had. 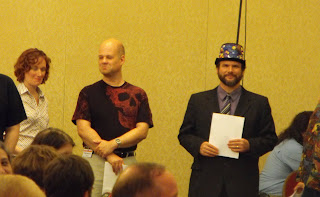 ---The contestants seated and ready to regale us with bad prose: 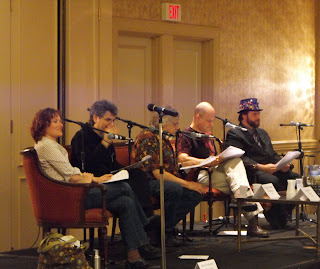 ---The opening of the competition. The disk was really funny for some reason: 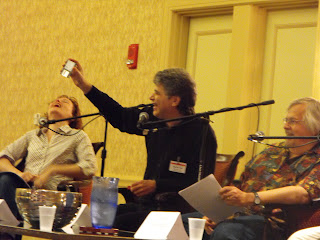 ---Craig Shaw Gardner reading. I tried to think of a Jimmy Doohan look-alike joke that would not get me punched in the nose at the next con, but failed: 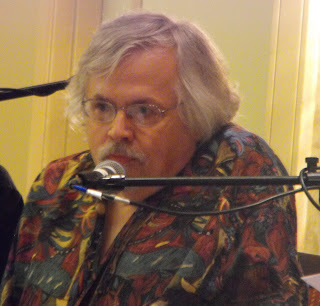 ---Mary Robinette Kowal reading. She was the smilingest contestant I've ever seen: 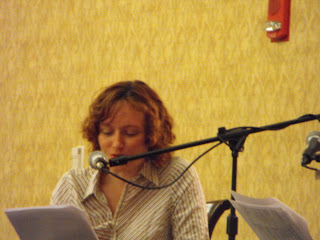 ---Yves Menard reading. Note the Halo of Inevitable Victory that surrounds him: 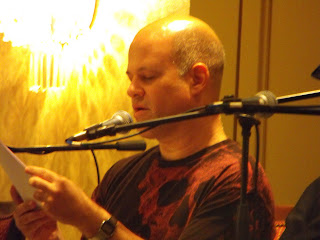 ---Mike Allen is pleased with his hat: 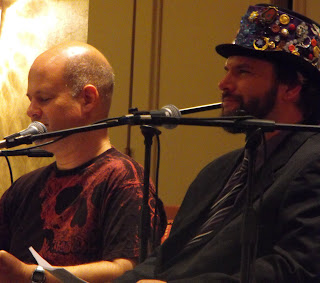 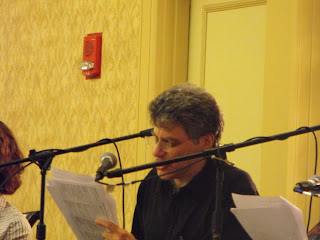 ---Finally, a few photos of Rob Shearman at his reading. Incredible reader, animated and enthusiastic: 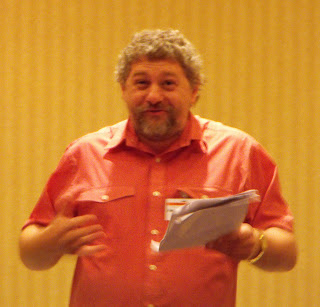 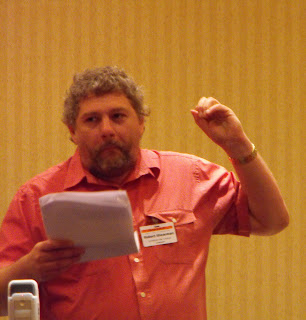 I wish that more of them had come out. I apologize for the lack of photos of women; I took a bunch of panel pictures that just did not come out, and my camera batteries croaked at the start of Liz Hand's fabulous reading from Available Dark. But I hope to get a better camera before July so that I can get better pics this year.
Posted by The Erudite Ogre at 3:20 PM No comments:

"I am forcing meaning on their ghosts:" A Review of J. M. McDermott's Last Dragon

"And when we sleep we see inside ourselves at the web of memories. The smells, and the sights, and the tastes and textures. And afterlife, this is all we have. This is all I have left. I reach for the ghosts that melt together. I try to rattle the truth of my life."

One could take away from this novel the conclusion that life sucks, that memory is fickle, that love and will and purpose all fade, that everyone is already a ghost in the minds of all around them. The novel is saturated with the roughness of life, with all of the ways that people use each other yet cannot escape the decay of existence. And it has its flaws, moments that don't feel right, some artificiality of explanation to keep the reader from feeling completely adrift or an exchange between characters that feels forced. It feels so elemental that these stand out, but are then put behind you, like a mistake in one's own life. The human truths that suffuse the novel are unimpeded by these small moments.
But none of these things are the point; we are all well aware of these conclusions. Who needs a novel to tell them that life is difficult and memory is more than a repository of facts and events? There is no pretension here that we are being acquainted with something new, from the shattered contours of a quest novel to the saudade that assails us throughout the novel. We are being reminded that we are human, we are being forced to remember that, as we try to comprehend the metaphors and dialogue and descriptions. McDermott uses us, our very ability to read and interpret and ponder, to make his point. It is not an easy point to assimilate, but that too is part of our humanity and the stories we tell.
Posted by The Erudite Ogre at 4:18 PM 3 comments:

Aetheric Ephemera: I Love Everything Edition

1) I have a new column up at SFSignal. It's about why I adore made-up stuff. I conclude that:

"It is a love that constantly reminds us that we are given all of the world, and always in exile, but that we can choose to engage nothing, to not sit at the table and just listen to our hearts beat, but to open them again and again, and gain sustenance, joy, and maybe even a few glimmers of wisdom from taking that leap of imagination into what isn't, but we wish could be."

2) I am going to guide the discussion of this month's Apex Book Club. We'll be talking about The Apex Book of World SF, edited by Lavie Tidhar. I'll have more specifics and a link once I am on a computer that does not arbitrarily shut down the web browser. But I suggest that folks are interested check out the free story at the book link, and also take a gander at The World SF Blog. There may be a quiz at some point. Just sayin'.

3) Over at Grasping for the Wind there's a guest post entitled "Science Fiction is Ridiculous," by David Goodberg. The title is pointedly provocative; what he discusses is how to distinguish SF beyond the idea of technological speculation, of how to separate SF from being just a thriller or drama with a tweaked setting. His thesis is that SF should be "ridiculous" and "extreme," a "new twist on the familiar." But it's difficult to see the distinction he is making because of the brevity of his discussion.

As an example he uses the film My Dinner with Andre, if it "actually took place on a distant planet and all characters were robots." But this is a straw-man argument: if that film had those elements, wouldn't the story be different? Why would those elements be there? It's true that the completely arbitrary addition of SF trappings is ludicrous, but it's unclear what his idea of ridiculous is implicated with the idea that "Science Fiction is a statement. It's a satire." What is the satirical statement being made, and what is being ridiculed in the process? I'm not sure that this notion opens up SF and moves it beyond the narrow idea of Orson Scott Card's that he invokes at the start (which seems truncated from a somewhat different idea that others quote).

In fact, it seems pulled down by Card's distinction, whether using the real/unreal comparison or the more precise idea of how rules work within the broader genres. While SF often utilizes speculative/extrapolative science based on current knowledge, unreal things can certainly happen. We know very little about alien biology, but people generally do not disallow SF about aliens from the canon because none currently exist. The rules distinction works a little better until you realize that some SF works to bend and sometimes break the rules in speculative fashion, while some fantasies have very specific rules (see Blake Charlton's invocation of "hard fantasy"). Both genres are fantastic, as all literature is, no matter how hard it strives to represent reality. The differences are often in the tropes, conventions, intentions, and types of knowledge used to give them a foundation. I like the initial idea of exploring what might be ridiculous in SF, but it needs more unpacking.
Posted by The Erudite Ogre at 2:36 PM No comments: 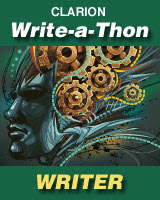